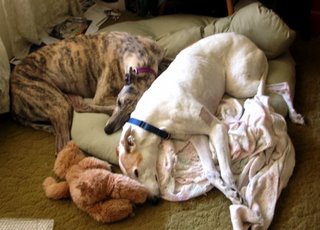 Ordinarily this would be quite adorable. Two greyhounds sleeping happily side by side on a big cushion. Look! There’s even a stuffed teddybear near by.

Except that I’m not supposed to be keeping this dog. Only GrowlyHead Folly. The other one is only temporary.

We (Team Greyhound of Ohio) had a Meet N Greet on Sunday at a local Petco with Travis and a beautiful red brindle boy named Denny on display for prospective greyhound parents. This afternoon out of my life has now become known as “Travis Fucks Up Any Chance He Has of Being Adopted By Trying to Eat the Kittens, Bunnies and Ferrets, and Drags a Table Across the Floor”.

The damn dog has decided we’re his family.

My biggest fear is that someday they’ll stage a mutiny. If that happens, there isn’t a damn thing I can do about it. I am outnumbered and outweighed.