FYI: OPTN requires indefinite follow-up of all transplant recipients, but surgeons and transplant centers have consistently opposed tracking living donors. Keep that in mind as I give a guided tour of this article.

Since 1999, UNOS has required transplant programs to report information about living donors at postoperative discharge, 6months, and 12 months (10). In June 2007, this reporting requirement was extended to 24 months (11).

UNOS doesn’t require anything; OPTN does. UNOS is simply the contractor managing OPTN, akin to Debbie being the Marketing Director. The researchers make this mistake all the way through the study, which is quite annoying.

The researchers purchased a list of US medical and surgical directors, hunted down their emails and sent them invitations to take a survey. 91 out of 226 responded. <- so how valid and/or generalizable are their results? Responding programs performed a mean of 106 kidney transplants, ranging from seven to 350 procedures. [in 2006]

Seven. Consider if you’d want that surgeon taking your kidney.

Donor adherence to recommendations for postoperative care within 6 weeks is more than 90%. However, adherence to program recommendations for long-term follow-up decreases sharply with greater time from donation. At 2 years postdonation, only 26% of donors at the 30% of programs recommending follow-up were seen, suggesting
that less than 8% of all donors are seen at transplant centers at this time point.

Transplant centers don’t handle the follow-up care themselves. After the 6-weeks required post-surgical check-up, they farm out the six-month, one-year and two-year follow-ups to the living donor’s primary care physician. The transplant center’s role consists of putting a couple of pages of paperwork in the mail to the living donor and hoping they bother see a doctor and fax the pages back. 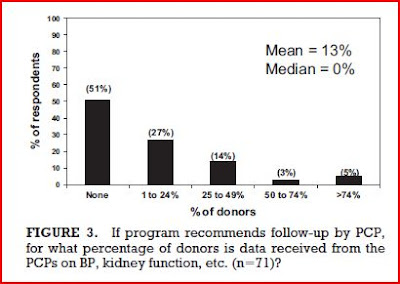 Seventy-eight percent of survey respondents recommend that donor follow-up care
be provided by PCPs, whereas 22% do not. In their comments to several questions in the survey, many centers emphasize that long-term follow-up care is usually provided by PCPs rather than transplant centers. However, the programs that recommend PCP follow-up also report that data on blood pressure and kidney function are rarely received from PCPs. More than half of the programs never receive any
data from PCPs, and the mean proportion of donors for whom data were received was 13%. Only 5% of the programs receive data on 75% or more of their donors.

[keep in mind these numbers only relate to the transplant centers that answered the survey; this says nothing about the 60% that didn’t]

Mental health evaluations are usually not included as part of routine donor follow-up, but 32% of programs report performing such evaluations when concerns arise, 10% plan follow-up evaluations if there are predonation mental health
risk factors, and 2% limit these evaluations to certain donor types.

First, how do they know when ‘concerns arise’ if they’re outsourcing the job to primary care physicians? Second, why the hell are they accepting living donors who have pre-donation mental health risk factors? That’s a blatant violation of their ethical duty to ‘minimize harm’.

Cost issues, including reimbursement to care providers, as well as direct and indirect costs to donors, are also cited by a majority of programs. Staffing demands are the least commonly reported barrier.

Medicare covers some of that cost, the recipient’s insurance lobs off another chunk. They charge $400,000 for a transplant; somehow they expect the public to think there’s not enough money to go around? (and again, where does the funding for the recipient registry come from?)

Fifty-two percent of respondents have no written protocols and do not include information about follow-up in consent forms.

As for the 28% of centers who reported they saw no need for living donors to be followed-up – every single one of them should have their medical licenses revoked. How arrogant of them, all non-donors themselves, to think there are no risks to losing a major organ.

A total of 35.7% of surgeons reported that “donor health is good-the program feels no need to follow them closely” compared with 12.5% of nephrologists

Transplant surgeons who are not specialists, just general surgeons with a certificate, folks who have no advanced knowledge of renal health or function think follow-up isn’t necessary. I say take one of their kidneys and see if they change their minds.

It is possible that some programs fulfill the minimum requirement to return donor follow-up forms to UNOS by simply indicating that follow-up information is “unknown.” This response currently avoids UNOS disciplinary actions for failure to complete forms, but would not seem to meet the intent of the UNOS policy.

Actually, we know that’s happening. Refer to my prior post on Tuttle.

Here is an actual 24-month follow-up form from a major US transplant center. Notice there is nothing regarding diabetes and certainly nothing about mental health isses or medications.

From the discussion portion of the article:

In general, U.S. transplant programs are not responding to call for widespread and prolonged follow-up of living kidney donors, nor are they satisfying UNOS goals for specific information postdonation.

Arguments that donor follow-up would benefit donors themselves, as well as contribute to the knowledge base of the field, do not seem to be commonly accepted. If a transplant center agreed that donor-follow up is important, one could argue that donor inconvenience should not be any more of barrier to follow-up than for completing a predonation evaluation, which includes much more comprehensive testing.

That says it all, doesn’t it?