With the news that UPMC has temporarily halted their living kidney donor program due to hepatitis transmission to a recipient, I thought I’d pull some OPTN data for my fair readers’ perusal.

These slides are from OPTN’s 2011 spring presentation. (click to enlarge, just be prepared to hit your back button) 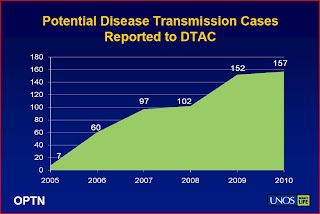 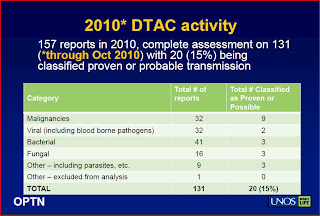 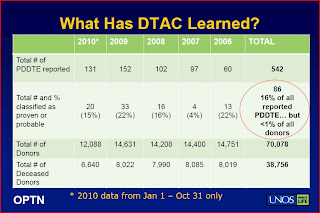 This committee has issued ‘guidance’ documents to transplant centers to reduce/eliminate disease transmission and collaborated with OPTN’s Living Donor Committee to improve screening of prospective living donors. While this is obviously a good and necessary thing, the motivation is not quite so crystalline. After all, it’s not as if this increased testing arose out of a need/want to protect and care for living donors. No, the sole concern, as always, is for the recipient.