The notes and presentations from OPTN’s June 2011 meetings just became available and I had the opportunity today to glance at the Living Donor Committee’s slides. 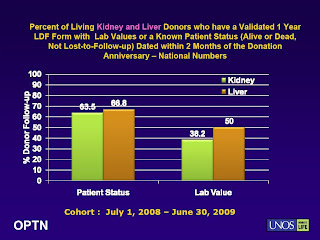 Just in case you don’t understand what you’re looking at (and for the benefit of the search engine bots that crawl through here now and again):

Of all living kidney donors from July 1, 2008 through June 30, 2009, only 63.5% were known to be either ALIVE OR DEAD one measely year after donation. This jumps to an equally pathetic 66.8% for living liver donors.

Sadder still is that there was evidence of a urine analysis in only 38.2% of ALL living kidney donors in that period, and a liver function test for only 50% of liver donors.

In a prior post, I talked about the prior year’s cohort (mid 2007 thru mid 2008), and indicated that “15 transplant centers had ZERO follow-up on ANY of their living kidney donors during that time period, and only 29 were 100% compliant.”

As for living liver transplant programs:

Reminder: This federal mandate has been in effect since 2000. For the past three years, OPTN has sent each transplant center statistics on how well/dismal they are in following this policy. But here we are in 2011 and not a single program has been disciplined for noncompliance.