Thirty pages is a lot to filter through, especially if one is lacking context or familiarity with the process or vocabulary of transplant. But where this document becomes interesting and somewhat important is in its appendicies. The information about hypertension, proteinuria, kidney function (GFR) etc, is more than is shared with prospective living donors and if known, can help a living donor candidate to protect themselves and make the best decision possible for their future health.

For example (page 19):
Caucasian hypertensive donor candidates younger than age 50 and non-Caucasian donors at any age with hypertension have a greater lifetime risk of ESRD and may not be suitable candidates for unilateral nephrectomy.

GFR, or renal function (page 21):
Ideally, kidney function should be assessed with a technique, which directly measures GFR using inulin, an iodinated tracer or a radioactive tracer. However, these techniques are not widely available, and a 24-hour urine collection to calculate creatinine clearance is an acceptable alternative. The adequacy of the 24-hour collection should be confirmed by assessing whether it contains 20-25 mg creatinine/kg body weight for men and 15-20mg/kg for women. The use of a serum creatinine alone, even if converted to an estimated GFR using one of the currently available formulas, is not sufficient.

The biggest revelation is as follows:

Kidney function usually declines with aging, so cut-offs to accept a donor should vary based on age.

If you’d like, conduct a experiment. Search for the major transplant related websites (those with info about living donation) and see what they say about pre-donation GFR in prospective kidney donors.

Does it say the minimum cut-off is a GFR is 80? Now refer back to the italicized statement.

To whit: A GFR of 85 would be of less concern for a 60 year old man, since that value is above average for that age and there is less remaining lifetime for GFR to decline. In contrast, the same GFR of 85 approaches two standard deviations below the mean in a 25-year-old donor.

And the whizbang climax: It is recommended that potential donors have measured GFR that is one standard deviation below the mean for the donor’s age.

So what is the mean GFR corresponded to age? The document includes a table based on two studies, which I’m including below. 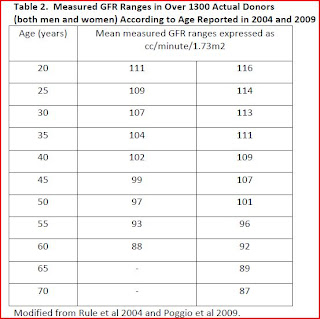 I obtained the referenced 2009 study, which contains a plethora of its own graphs and tables. It repeatedly addresses “upper and lower limits of normal values” which they peg at the 5th and 95th* percentile (The measure used by the Cleveland Clinic and Mayo Clinic), but never addresses standard deviation. It still has its uses though – see below (click for enlargement) 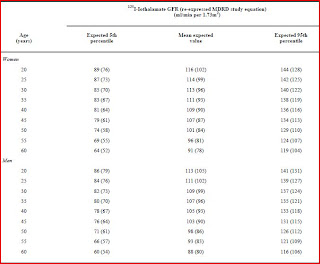 Living donors generally have the I-Iothalamate GFR done, which is the first set of numbers not in parenthesis. Bear in mind these are PRE-donation numbers, and it’s safe to say that the one standard deviation referred to in the consensus document would be higher than the 5th percentile listed here.

Compare these numbers to the one-size-fits-all 80 GFR cut-off currently used by the transplant industry. Think there’s a big gap there? So do I.

*Because really high GFR can be indicative of other disease related issues, believe it or not.

[…] Which is exactly what the Joint Societies Consensus Document said, but OPTN stripped it out of the final proposed public policy in […]

[…] GFR cut-off, which severely harms LKDs who fall on the lower end of the spectrum. In 2010, a Consensus document on LKD medical evaluation called for a predonatoin GFR based on sex, age and Body Surface […]