I was fortunate enough to be gifted with a copy of this collection provided I make public my thoughts. Since I’m not particularly shy about sharing my opinions, and I’m all about the free stuff (Especially books… And food… I *never* turn down free food…), I accepted the offer immediately.

For those who don’t know, I temp at the Board of Elections twice a year, helping to train the folks who work at the voting centers processing voters. This year I also spent election day at the BoE in what we call the War Room, aka Mission Control, aka where all problems at the vote centers are reported and sorted out. I brought the Ohio short story collection with me to peruse between panicked phone calls.

At one point, one of the BoE guys wandered past.

As one might expect, he said this quite loudly, garnering the attention of everyone in the place. Did I mention I was the only woman in the room?

“Dude. OHIO stories. O-H-I-O” I replied foisting the book into the air and waving it around.

This, not surprisingly, wasn’t nearly as interesting as the prospect of me reading stories about Hos, and the guys went back to work.

Yes, this should make you worry, just as smidge, about our election processors.

A friend and I used to joke about a third friend’s (Let’s call her Lulu here, for the sake of protecting all parties involved) taste in books, which leaned heavily toward those considered “literary” . Our discussions would go something like this:

“How was [insert title here]?”

‘How it is’ in this context meant death, dying, fear of death, grief, anticipated mourning and depression.

While the “Best of…” anthology is far from morbid, it does have its share of the above. Fortunately it also has alien abductions, Wall Street douchebags, exercises in familial dissonance, ghost hunters, and…

Are you intrigued yet?

PS. With all the abuse Ohio and Ohioans take, this anthology is a great reminder that among other great things, Ohio produces really wonderful writers too. 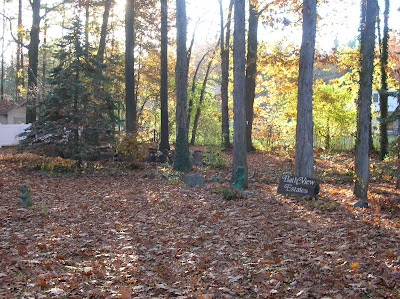 This is the Land of Many Trees, aka my back yard. Looks beautiful, doesn’t it? (click to enlarge photo for full effect). Except who do you think will wielding a leaf blower all weekend long? Yeah.

If you’re within earshot of the state of Ohio, it’s impossible to ignore the dismal economic situation we’re in. We didn’t benefit from that ginormous housing boom that affected many cities/states so we haven’t been pummeled by that particular recession, but we still have a number of manufacturing jobs (read: American car companies) and we are in possession of some of the highest state school tuitions in the nation.

So our state legislature and governor, faced with a horrific deficit, have been warring over next year’s budget. Emails abound about library cuts, early learning initiative cuts, everything-else-under-the-sun cuts, and they’re all bad, Bad, BAD. Everyone is calling for everyone else to email/write/call their state lawmakers and complain.

The problem is – Ohio simply doesn’t have enough money. No amount of teeth-gnashing and persuasive pontificating is going to change that fact. So what do we do?

The Republicans who have controlled Ohio’s legislature (seeming FOREVER – seriously) are drooling at the prospect of our Democratic governor raising taxes. They’re waiting with pens poised over paper to begin the next gubertanorial campaign to oust our well meaning but not aggressive enough (imo) leader. Democrats, meanwhile, are just as guilty, afraid to even utter the word in their sleep for fear of inciting that very wrath.

Yep, our state lawmakers are more concerned about keeping their jobs, and increasing their positions of power than they are about their consituents and future health of the state. Instead of solving the problem (which does not necessarily include raising taxes on the already beleaguered citizens), they’re covering their own asses.

FYI: There s $7 Billion a year in tax credits, exemptions and deductions in Ohio’s tax code that our legislature is completely ignoring.

For example, payday lenders, mortgage brokers and other financial companies pay taxes at a lower effective rate than banks. Erase that relief and the state would collect nearly $10 million PER YEAR.

A few years ago, our forward thinking state decided that if you managed to survive to senior citizenship, then you simply shouldn’t have to pay property taxes. Doesn’t matter if you’re a retired CEO sitting in a $5 million dollar house – no property taxes. If we corrected that little mess, limiting the exemption to something reasonable, we could rake in another $140 million PER YEAR.

Or wait – extend sales tax to entertainment events, lobbying and debt collection (and who doesn’t want to tax debt collectors and lobbyists out of existence??) – $90 million annually.

Here’s another little nuggest: the state of Ohio caps the amount of sales tax paid by those buying fractions of private jets to $800. WTF? you should be asking. What the hell is so special about people who can afford even a PART of a PRIVATE JET that they should be tax break?! Without this cap, the typical average sales tax on one-eighth of a jet would run in the vicinity of $45,000. Instead, these wealthy individuals are writing checks smaller than the sales tax on the average automobile – $100.

So, if you want to see libraries, early learning initiatives and other such programs continue to exist, insist that our state legislatures get their heads out of their butts and address some of these egregious tax breaks. If they refuse, vote them the hell out of office. Then follow through.

The Office of Budget and Management
Ohio Department of Taxation